Membership is open to any male member of the Recreation Centers of Sun City West.  Membership dues are currently $10 per year, reduced to $5 for those joining after July 1 of the year.  In addition, a new member pays $5 extra to defray most of the cost of his Club name badge.  A new member may join by presenting his completed Membership Application form and a check payable to SCW Men’s Putting Club for the appropriate amount or cash at the Check-In Table at any weekly putting event.  He also will want to pay the entry fee of five (5) dollars for that day’s event.  Members are urged to pay their entry fee with five (5) one-dollar bills, in order that singles will be available for pay-out after the event.

A prospective member may elect to play five times as a non-paying guest in order to decide whether to join.

Renewal dues for the next calendar year are due on or after December 1 and become delinquent after January 10, resulting in a suspended membership until the renewal dues are paid.

The Club’s Bulletin Board is located at the Grandview Golf Course, on the East wall of the building, just outside the door to the Crooked Putter Restaurant.  This is adjacent to the practice green where our putting competitions are held.  The Bulletin Board contains notices of importance to the Club members, including the weekly updated handicaps, the posting of Scores & Awards results for the most recent two weeks of play and the posting of the most recent quarterly awards.

Below the Bulletin Board are two drawers for use by the Club.  The left-hand drawer is a slotted locked drawer used primarily for safe keeping.  The right-hand drawer contains an envelope of Membership Application forms and copies of materials concerning Club membership. 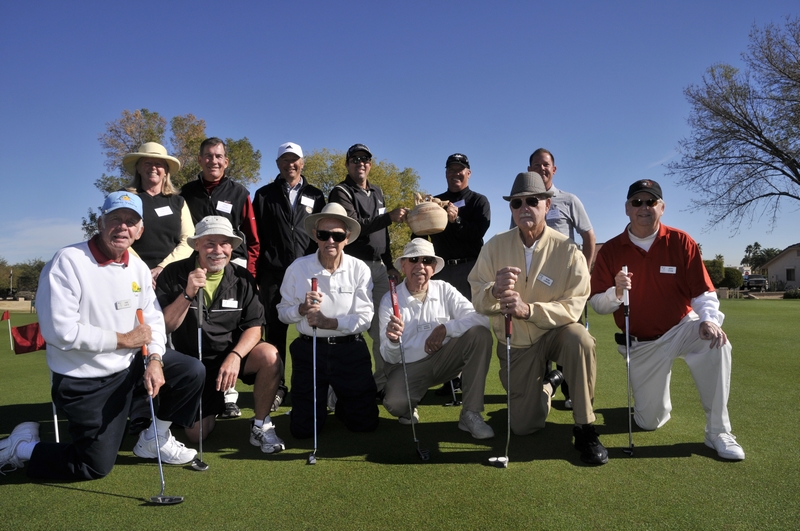 The entry fee for a weekly putting event is five (5) one-dollar bills.  Of this amount, $1 is paid to the host golf course as a greens fee, a half-dollar is retained for the Club’s general operating fund, and 3-1/2 dollars are allocated to prize money, distributed back in several forms to the winning players in that day’s event.

At the conclusion of the 18-hole event, the players line up at the Pay-Out Table to turn in their score cards.  For each one-putt, a player collects $2 at the table.  Each week a particular hole is labeled as the Money Hole, and any player who one-putts the hole receives an award of $15.  The Pay-Out Table also handles the Money Hole and the Cold Putter pot.  Whatever prize money may be left over is deposited into the Awards account to be further distributed by the Scores and Awards chairman in several categories.  Although all the remaining prize money is allocated to winners of this specific event, these weekly awards are accumulated and paid out at the Club’s quarterly General Meeting and Awards Presentation (breakfast or lunch is served at these quarterly meetings).  The award categories are as follows:

Using the 18 hole locations previously set by the greenskeepers, our course is laid out with the guidelines that no hole will be shorter than 20 ft and no hole will be longer than 40 ft.  Each hole is marked by a numbered flagstick in the hole and a numbered wooden tee marker placed at the starting point.  The challenge in laying out the course is to assure minimal interference to the putting by members walking from one hole to the next or waiting in line at a tee for their turn to putt. 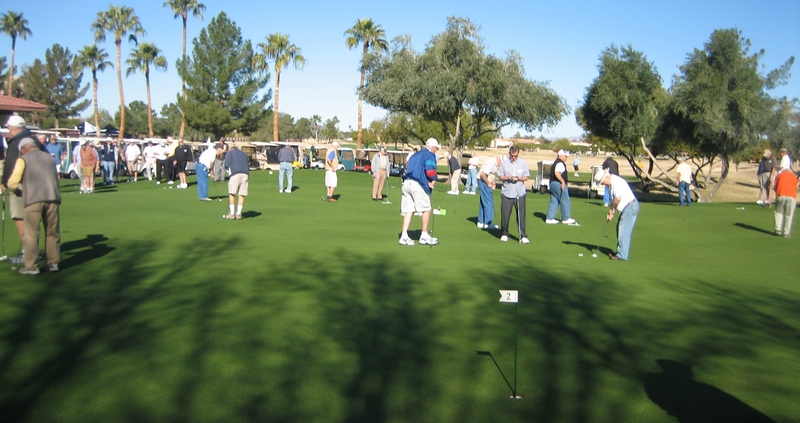 Handicaps (in the range of -2 to 10) are recalculated and posted each week, selecting the best 5 scores of the most recent 10 games, in accordance with the following steps:

After the first 5 games, a provisional handicap is calculated to allow a player to compete within one of the handicap-grouped “flights”.  Before that, the player is assigned no handicap (NH) and competes on the basis of gross scores within the NO-CAP flight.

A player’s Handicap is subtracted from his “gross score” to determine his “net score”.